CNBC’s Jim Cramer is such a passionate supporter of the stock of Apple that, sometimes, even he knows it’s worth getting a second opinion. So, on Tuesday, he got technician Carolyn Boroden’s take.

After inspecting Apple’s charts, Boroden, who runs FibonacciQueen.com and is Cramer’s colleague at RealMoney.com, came out “cautiously optimistic” on the stock’s near-term future, Cramer said Tuesday.

“Her diagnosis? She thinks that Apple could soon be ready to rebound, … perhaps even climbing back to new highs,” the “Mad Money” host said.

Shares of Apple have been under pressure since the company’s earnings report last week, in which the iPhone maker announced that it would no longer break down individual product performance and issued softer-than-expected guidance. Apple’s market cap has since slipped under the $1 trillion level.

To figure out where Apple’s stock could go next, Boroden used the concept of symmetry. In her 31 years of technical analysis, she has noticed that stocks tend to follow patterns when they decline or rally. For example, if a stock tends to bottom after falling 10 basis points, there’s a good chance it will bottom after future 10-point declines.

On Tuesday, she paired that with her other signature method: running a stocks past swings through Fibonacci ratios — numerical sequences that repeats throughout nature — to find key support and resistance levels for the stock. 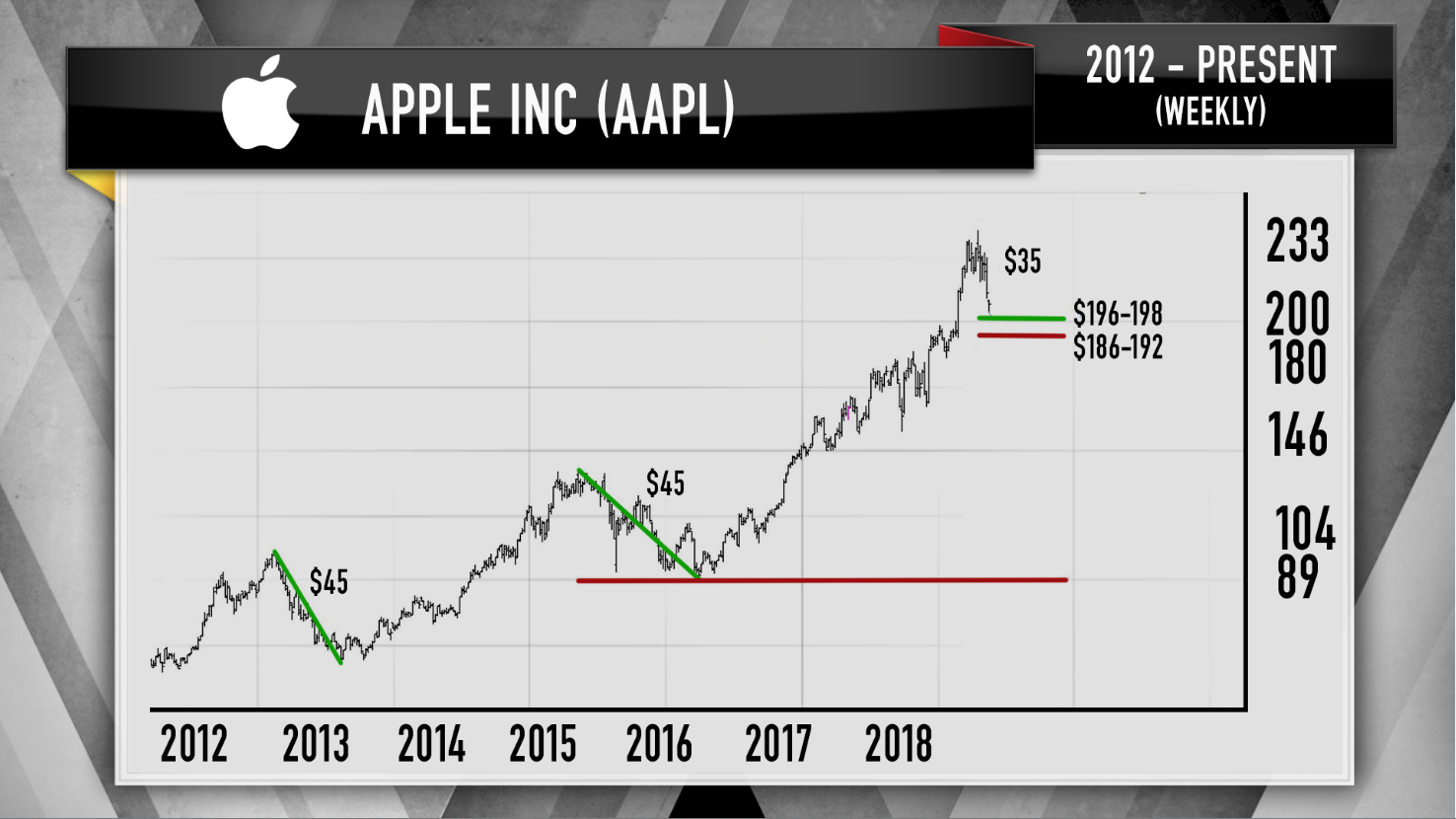 “When you do this with Apple, you find two zones. There’s a potential floor of support running from $196 to $198, and another one lower running from $186 to $192,” Cramer said. “If the rally in Apple is going to resume, Boroden says that, ideally, we want the stock to hold somewhere between that first floor of support.”

Boroden also used this method to find out when Apple’s stock was likely to change course. She found five Fibonacci time cycles all coalescing this week, meaning Apple’s stock could “make an important low” during the week, Cramer said.

“Apple has a powerful floor of support here. If that floor holds, Boroden believes the stock will quickly find its footing and go right back to rallying,” the “Mad Money” host said. “As long as we don’t violate the recent lows, she thinks Apple can potentially zoom to new highs — she thinks it could go to [the] $243 area.”

However, if Apple’s stock trades below its floors of support, the technician warned her thesis would unravel.

“The bottom line? The charts, as interpreted by Carolyn Boroden, suggest that Apple might not have much more downside before it bottoms, and that, likely, it bottoms sometime this week and then starts climbing again,” Cramer said. “As for me, I think it’s too hard to trade in and out. That’s not my thing. Apple’s a great company with a cheap stock and I’d be a buyer here, because, given the size of the company’s buyback, I’m confident Apple will be buying right alongside you.”

Shares of Apple closed up 1.08 percent on Tuesday, at $203.77 a share. The stock rose slightly in after-hours trading, though was still shy of the $1 trillion market-cap level it reached in August.

Cramer Remix: This market is telling you its next victim